Following my own advice 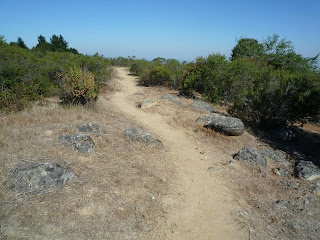 When I was lucky enough to have a good hunk of free time one day last week, I poked around my site for a hike to update. It was hot and I had to be home in mid-afternoon, so I wanted something mostly shaded and not too far from home. I settled on Los Trancos Open Space Preserve, where according to my notes, I last hiked in 2001. Yow!
Although I have hiked at Los Trancos at least half a dozen times, it had been so long (or perhaps my brain just doesn't retain as much these days) that I had to print out the description from BAHiker and follow the suggested hike. I found only one small update was needed; the trails remain in fantastic shape, there are no new trails, and nothing has been renamed. Since my last visit a trail connection from Los Trancos to Foothills Park opened, allowing folks hiking the Bay Area Ridge Trail to trek through Foothills, which is otherwise open only to Palo Alto residents. I'll get there one of these days... 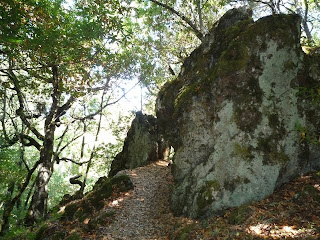 Los Trancos is quite small compared to neighboring preserves Monte Bello, Skyline Ridge, and Russian Ridge, but LT packs a great trail system into 274 acres. The most popular trail is the San Andreas Fault Trail, which seems popular with folks from out of the area -- last week the parking lot had more out-of-state cars than local ones. Hikers can follow a self-guided earthquake tour through the easy loop, but I usually prefer to head deeper into the preserve for more peace and quiet (and a longer hike). 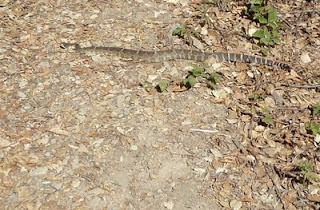 Nothing exciting to report about the hike with one exception: within my hike's first minute I came across a rattlesnake stretched across the trail. At least it wasn't coiled!
Posted by Jane Huber at 10:07 AM

I've run into more rattlers along that space, in Russian Ridge and Skyline, than just about anywhere else I've hiked - including Anza Borrego SP (desert) and JTree. Nice photo!

I can't promise you rattlesnakes, but there are many spiffy new trail markers going up on the north side of Mt. Tam. Looks like some favorite old side-trails are being decommissioned too, and at least one old-timey route, the Music Stand (or Camp) Trail, is not getting a new marker (but at least the music stands are still there).

John, the only place I've come across a coiled rattling rattler was on the north slope of Tam! In the woods! In the shade! While my husband was carrying (then) baby in the backpack. I read about MMWD's new trail plan. They are letting some minor trails go, but leaving Music Stand (somewhat) because of its historical importance. North slope is an easy place to get lost, but I have mixed feelings about it all.

Came across a Northern Pacific rattler at Edgewood (RedwoodCity) last spring on the lower Ridgeview loop trail. It was sunning on the trail and coiled up and hissed as I carefully passed. Nice size about 3 ft and quite healthy looking. Also, at Purisima another Northern Pacific rattler along the top ridge line (near Harkins Ridge)of Craig Britton trail. This one did not like discovering a prime sun spot was occupied by me catching some sun and tried to "rattle" me into moving. But I was there first and refused to budge so he eventually gave up and retreated :) (True story!)

Wonderful place! I appreciate your creative thought I think we must explore our surroundings on our own and find the best place where we can spend time alone. Now you can get best dissertation service from us to complete your task easily. It has been two years now in the lovely place that I can get.

Best urls-opener for opening multiple websites with one click.