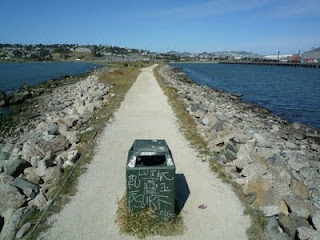 There's an old joke about San Francisco real estate, that land here is so expensive because they're not making any more of it. Our small city's shoreline has been altered by landfill and subsequent development in the past, but in more contemporary times the emphasis has been on coastal conservation rather than fill and build. What is now called Heron's Head Park is one of the last bits of artificially made city land. This small peninsula was born in the early 1970s, as part of a Port of San Francisco shipping terminal project that fizzled. The land remained, abandoned, until the late 1990s, when environmental groups cleaned up the site and opened it as Heron's Head Park. At first glance it's a strange location for bird watching -- Port of San Francisco cargo terminals loom directly to the north, and the old Hunter's Point Power plant (now being dismantled) wheezed just to the southwest. But this little scrappy spit of land is surrounded by water on three sides, with small patches of salt marsh protected on the south part of the park, and although this man-made habitat fails to resemble any of the other pristine natural bay area shorelines, it attracts a huge variety of waterfowl, shorebirds, and wading birds, as well as songbirds, owls, hummingbirds, and more.
The trail runs less than a mile before it dead-ends at the bay, and the grade is perfectly flat, making this a great choice for a family walk with the very young or very old. It's also an exceptional choice for beginning birdwatchers -- bring binoculars and a field guide!

Read more about Heron's Head on Bay Area Hiker.
Posted by Jane Huber at 9:41 AM

Great post. I know of a great group of high school students that are training right now to lead birding tours for the public at Heron's Head Park. It's very cool program that teaches about the park and the birds that call it home. Dates and info at http://www.sfnature.org/programs/heron_head_park.html

We provide home sellers with a cash option to purchase their property quickly—with NO Repairs, and NO Fees or Commissions.

Avoiding foreclosure? Facing divorce? Moving? Upside down in your mortgage? Liens? It doesn’t matter whether you live in it, you’re renting it out, it’s vacant, or not even habitable. We help owners who have inherited an unwanted property, own a vacant house, are behind on payments, owe liens, downsized, and can’t sell… even if the house needs repairs that you can’t pay for… and yes, even if the house is fire damaged or has bad rental tenants.

Basically, if you have a property and need to sell it… we’d like to make you a fair cash offer and close on it when you’re ready to sell.

Heron Head park is best for hiking. I have an adventurous trip with my friends to this park the last year and I have pursued essayshark review to enhance my writing tasks. And I reallyenjoyed it. I would highly recommend this park to everyone to visit and have fun to make memories.

The Best view ever.