View 3 alleys and a mountain in a larger map
I haven't had much time to hike in the bay area's distant lands lately -- my trail forays are usually short jaunts in parks and preserves close to the city. I'm finding a great deal of enjoyment and aerobic exercise however, trekking around city streets, alleys, and paths.

Mount Davidson is my favorite city hike, but a loop around SF's highest hill only takes around 15 minutes -- not enough cardio for true exercise. When I started combining Mount D's trails with pavement in surrounding neighborhoods to the south, I found an hour's worth of good exercise and enough city nature to temporarily satiate my hiking demons.

A good place to start is in the Sunnyside neighborhood, on Mangels Street near Gennessee Street. Parking is usually easy during the day, and a bus stop is close by at Monterey and Gennessee.

1) Begin on Mangels, heading west toward Ridgewood. The residential street rises gently to Ridgewood. Continue a few steps more, where Melrose doubles back, Mangels continues straight, and Brentwood ascends to the right. Turn onto Brentwood.
2) Walk one block on Brentwood to an intersection with Hazelwood. Turn right onto Hazelwood. 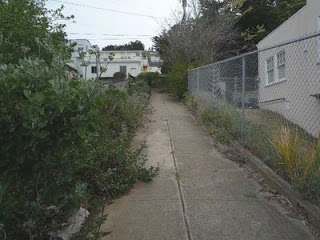 3) One short block uphill leads to a junction with Los Palmos. Look across the street to a set of ascending steps -- the number 698 is painted onto the wall just to the right of them.
4) Begin walking up the steps, on Globe Alley (first photo). This feels like someone's private walkway, but the public path climbs between lots, bordered by many planted natives, including beeplant, scorpionweed, coyote brush, and lizardtail. The stairs give way to an ascending sidewalk, the alley shifts to dirt, then steps return. The final stretch of alley shares a paved driveway until it ends at Cresta Vista Drive. Turn right.
5) The street climbs some more, and through breaks in the houses on the right, look south toward San Bruno Mountain. Some of these houses along Cresta Vista are supported by stilts and meet the earth only at the edge of the street. The houses on the left side creep up the hill in levels. Cresta Vista reaches a high point and then begins to descend. When you reach an intersection with Coventry Court, turn left. 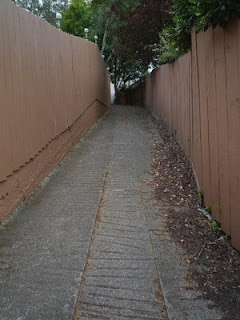 6) This little one block street quickly climbs to a dead end. Look for signed Coventry Lane (second photo) at the end of the block. Climb along the narrow paved alley which squeezes past fenced houses to the next junction, with Myra Way. Turn left and follow Myra uphill past the bus stop, with Mount Davidson visible on the right. At the intersection of Myra, Lansdale, and Dalewood, continue to the right on Dalewood.
7) A few houses down the street, look for the gated entrance to a fire road. Turn right.
8) The wide dirt fire road immediately enters a dense forest of eucalyptus and Monterey pine. Ignore an initial path climbing off to the right, and continue to a junction just before the fire road bends right. Here a path ascends on steps toward the mountain top, on the right, but instead turn left.
9) The narrow dirt trail descends gently through the forest where you might see northern flickers and woodpeckers, as well as chickadees and sparrows. More than once I've spotted Steller's jays here. Sharp-eyed hikers might see owls (which I've heard but never seen) bushtits, and hummingbirds. When the trail forks stay to the right.
10) Climbing gently, th 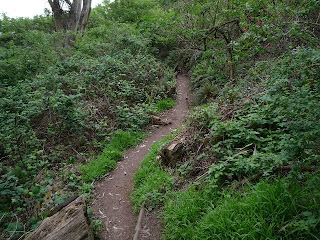 e trail (third photo) weaves through trees, red elderberry, and blackberry, until it steps out into coastal scrub. Views emerge and stretch to include most of the city to the north and east. The trail is squeezed here by dense shrubs of huckleberry, with other natives mixed through. As the trail bends right, the shrubs thin and grassland takes over. Keep maneuvering around the hill, ignoring any ascending or descending paths. Some sections are rocky and require careful footfalls. In spring, look for goldenfields, patches of iris, and checkerblooms. After the trail squeezes past a tall chain link fence on the left, ascend to a junction. Here a path climbs to the right, toward the summit (an optional add-on, not described here), but instead turn left. The wide dirt trail drops back into the forest then ends at the bus stop and intersection of Myra, Lansdale, and Dalewood. Turn left and retrace your steps back to the junction of Conventry and Cresta Vista.
11) Turn left onto Crest Vista. The road drops sharply to a T junction with Bella Vista. Turn right.
12) The vacant rocky hillside on the right here is dotted with fennel. After one block, turn rig 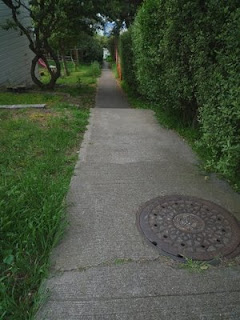 ht onto Burlwood. After one long winding block, Burlwood ends at Los Palmos. Turn left.
13) Just before 499 Los Palmos, look for a descending path on the right. This junction is marked by an old city emergency-type red callbox. Turn right, onto Lulu Alley (fourth photo).
13) The descent is on steep steps and sharply sloping pavement between houses and yards. The alley ends at Melrose -- turn right.
14) After a few houses, Melrose ends at a junction with Mangels. Turn left and return to your car (or extend your walk to the bus stop).

I haven't yet walked this route with a gps, so exact mileage is unknown. It takes me a little less than an hour, and I estimate the elevation gain is about 500 feet.

There are some incredible old photos and more information about the history of Miraloma Park here.
Posted by Jane Huber at 1:36 PM

It is very interesting for me to read this blog. Thank you for it. I like such themes and everything connected to them. I definitely want to read a bit more on that blog soon.
Alex
Mobile phone blocker

Nice blog you got here. I'd like to read more about that matter. The only thing it would also be great to see here is a few pictures of any gizmos.
David Watcerson
Cell jammer

Something else that you will find important is that they can help prevent terrorist actions by not allowing a cell phone to have a signal. You know that terrorism is a concern for some people in office buildings. So you could find that these could prevent someone from exploding a bomb activated by a phone. This alone could help you save many lives that could have been put at risk if you did not have this present in your office.